There is a movement taking place in various places around the world, to bring about Universal Basic Income. Just this past week, official UBI grants have been announced in Spain and South Africa. Proposals for regular people to receive a minimum guaranteed income have become mainstream, as economic stimulus has been deployed to deal with the devastation and joblessness following the lockdowns.

Here in the USA, after Andrew Yang’s presidential run (and our yang2020.app) for a national UBI, other people have picked up the UBI torch. A growing number of mayors across the country, beginning with Michael Tubbs of Stockton, CA, have launched Mayors for a Guaranteed Income committed to carrying out the vision supported by both left (Martin Luther King) and right (Milton Friedman). The bipartisan organization of 30,000 mayors passed a resolution supporting a Basic Income.

Now, mayors have joined together to do UBI pilots, and Intercoin can help make this happen: The Basic Income Today Community was created to provide news and information and to further the discussion and debate about UBI.

What’s more, the movement is finally getting the support it needs from major figures: The gift, part of Dorsey’s promise earlier this year to give away $1 billion, will go to a new coalition of 15 mayors founded by Michael Tubbs, the 29 year-old mayor of Stockton, California. Elon Musk tweeted his support for a universal basic income after a...

11 mayors are advocating for a guaranteed income policy. Elon Musk seemed to back the measure in a tweet to Bernice King.

Local Currencies for UBI in Cities

Universal Basic Income is all about building things from the bottom up, and Intercoin was launched with UBI in mind. The vision of a UBI might be perceived to be at odds with some of the anarcho-capitalist crowd, which invested in Bitcoin. But the way Intercoin has architected it, the UBI would be based on a completely voluntary basis, through community currencies. And rather than being a “one and done” deal, over time vendors can be encouraged to have the money circulate through the local community, building a much more sustainable local economy. 6 Likes
MiamiCoin down 88% in less than a year
South Korea’s Universal Basic Income Experiment to Boost the Economy
This is why we call what we are building Web5
Voluntary Basic Income
Mayor of NYC Plans To Roll Out A City Cryptocurrency
Norman July 12, 2020, 2:11am #2

I think local currencies should definitely be the pilot cases for UBI. Once the idea is validated we can spread it gradually to a state level

The current UBI pilots are probably being planned without local currencies. So people could spend the money on Amazon or businesses could pay suppliers and the money leaves the community. It’s one-and-done.

What if it was a local currency, usable for public services and a growing array of local merchants? Then people would have to spend it locally. Yeah merchants would cash out the money at first, but in Phase 2, locals and tourists would start to buy the currency (to get better deals at merchants) and thereby start to balance the flow out of the community currency and into $ with an opposite flow. In Phase 3 merchants can then choose to pay employees in this currency so as not to lose 10% on cashing it out. So the currency would increasingly circulate.

At Qbix we built a lot for community member adoption and onboarding. Now with Intercoin we need to do the same, nail the adoption of currencies, but on the level of economics instead of just user experiece.

There’s a new video on our YouTube channel explaining UBI and what is Intercoin’s Solution to Universal Basic Income.
If you haven’t Subscribed to our channel yet, please do so and Turn On the Notifications so you don’t miss out on any of our latest videos.

Hey all, updating this thread with some new content here. More stuff on UBI https://www.youtube.com/watch?v=6WMDCsvRz44

Thank you @Norman for shareing it here as so many people are asking how can #UBI help #Communities? I’ve posted today a link to the same video on Twitter in response to the Mayor of Miami chat with enterpriners as Intercoin’s Solution to Universal Basic Income can help not only private companies but also governments.

Localized, decentralized UBI needs to be accounted for in a centralized, globalized world. Intercoin solves this problem.

Not many people know that Universal Basic Income is all about building the vision of freedom and income on a completely voluntary basis. I agree that it would be easier to implement through community currencies instead of fiats and to have the money circulate through the local community for a sustainable local economy.

People from all over the political spectrum have advocated for and supported the idea of Universal Basic Income (UBI) for many years.

I’m looking forward to attend a special Intercoin show in the Twitter spaces with an incredible guest today at 12pm EST / 5 pm BST.

Scott Santens is the author of Let There Be Money : Understanding Modern Monetary Theory and Basic Income

He is also an editor of @UBIToday with a great understanding of what happens when people receive a Basic Income.

Set your reminder to join us TODAY 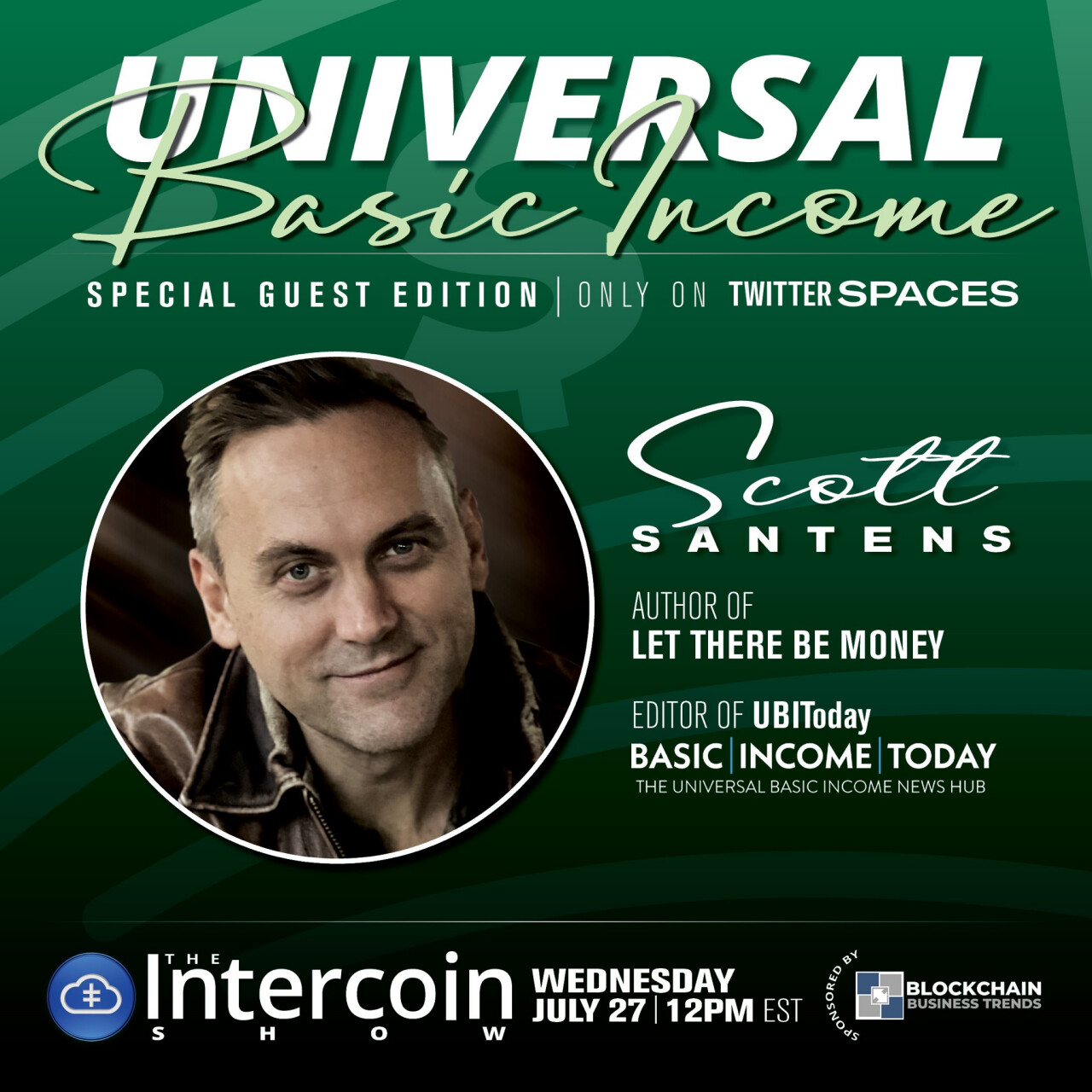 Looking forward to this! Scott had so much knowledge about UBI. I hope as many non UBI people come so they can join the movement!